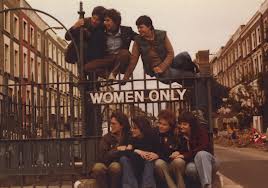 A parallel revolution was born out of the feminist movement of the 1970s, coming to an end around1995.  Filmmaker Myriam Fougere takes us on a journey to meet the lesbian writers, philosophers and activists who were key players in creating a revolutionary sisterhood. From Montreal to Texas, by way of New York, Myriam encounters lesbians who chose to live only among women. This marginal yet international movement is brought to life through archival footage and photographs, and evocative interviews with these courageous women, many of whom are now in their seventies and eighties.

You’re Not My Target Audience

You’re Not My Target Audience is a documentary film following three professional performers as they navigate their careers as queer women artists in Toronto. The documentary uses interviews, spoken word, and performance pieces to address issues of access, invisibility, and oppression. Theatre creator Moynan King, hip-hop artist MC Jazz, and performance artist Jess Dobkin discuss their artistic works and the mandates and uses of various performance spaces in Toronto. In conversation with these women, the film negotiates the obstacles and celebrates the achievements of queer women performers in Toronto.

After a long period in life identifying as a Butch Lesbian, Cuthand considers transitioning to male. This experience involved a six month period of her life during which she went by the name Sarain, which she would have been called had she been born a boy, and asking to be called by male pronouns. Complicated by mental health crises, Cuthand found themselves in a mental health group home for women, having to hide their gender dysphoria. After a considerable amount of thought and discussion, Cuthand changed her mind and decided to remain a Butch Lesbian. Explaining her decision, she touches on the desire to maintain a connection to the Lesbian community, as well as the sexy genderfucking that happens when one is a masculine woman. Shot partially on location in Hamburg, Germany, riding back and forth on the UBahn is a metaphor for her eventual acceptance of fluctuating between a masculine and a feminine gender. In a nod to her two spirited ancestors, she mentions that she would have been able to make up her own gender had colonization not happened.