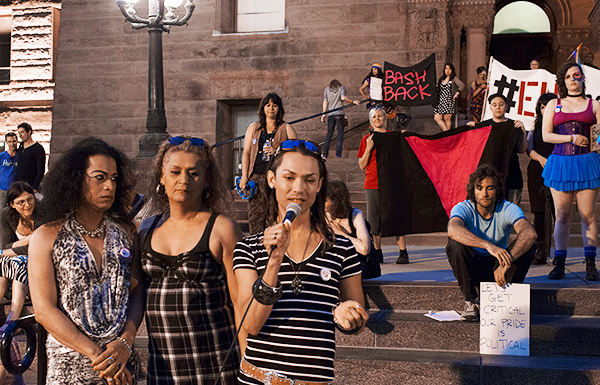 Many North American LGBTQ pride events initially emerged out of sites of revolt and resistance— such as the anti-police riots at the Stonewall Inn in NYC in 1969 and the protests that began after police bathhouse raids in Toronto 1981. Today, however, PRIDE™ is big business. Non-profits formed for the purpose of hosting pride events in cities such as Toronto, San Francisco, and New York. In Pride Denied, queer and trans activists and artists call for a return to prioritizing political activism and community support that characterized the emergence of the contemporary LGBT rights movement more than 40 years ago.

Kami Chisholm is a queer, disabled, activist filmmaker and arts curator whose work focuses on dismantling white supremacy, ending settler colonialism, and the quest for justice for those commonly denied access to the means to live and thrive. Chisholm has been making films for more than 20 years, since beginning her BA in Film Production and English from Loyola Marymount University. She also holds a PhD in History of Consciousness and Feminist Studies from the University of California, Santa Cruz, and an MFA in Film Production from York University. Her most recently completed documentary, Pride Denied (released in 2016 and distributed by Media Education Foundation and Vtape), explores topics such as homonationalism and pinkwashing in the context of the 2014 World Pride festival in Toronto.