Center of My World

Center of My World

Gorgeously adapted from the best-selling YA novel by Andreas Steinhofel, Center of My World tells the story of 17 year old Phil and the drama he faces once returning from summer camp. Phil lives in a whimsical mansion in the woods with his eccentric mother Glass and his twin sister, Dianne, with little contact with the nearby village. The villagers find the family enigmatic and strange and there are whispers that Glass may be some sort of sorceress. A mysterious and beautiful new student, Nicholas, stirs new feelings in Phil that leads to a passionate love affair, despite the jealousy it causes from Phil’s best friend Kat. Phil must learn to navigate his destiny and become the center of his own world. 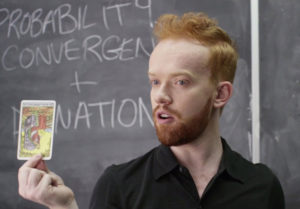 A young man experiences a string of bad luck at the same time a man resembling the Ancient Roman god Saturn starts following him around.