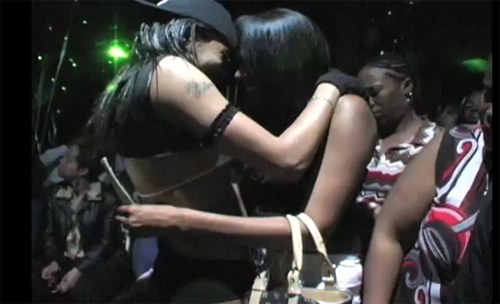 Shakedown, a series of parties by and for black women, dominated Los Angeles’s underground lesbian strip club scene from the 1990s through the 2000s. This film is equal parts provocative, touching, sexy, and nostalgic for days long gone.  Director Leilah Weinraub captures the glamour, grit, and joy of club life at Shakedown, from welcoming the birth of the first Shakedown baby, to dancers being harassed and arrested by the LAPD. We meet a captivating crew, including Miss Mahogany, a black house mother who has organized parties since the ’80s; Egypt, a femme performer with an alter ego as dominant Sasha Fierce, but a voice so soft you’d never know it was coming from the same person; and Ronnie Ron, Miss Mahogany’s butch lesbian protégé, a brilliant MC and the founder of Shakedown Productions.

It’s a celebration of a unique time and space, crackling with footage that (amazingly) was shot and has survived. So settle in and grab some dollar bills. These girls know how to put on a show.

For Mature Audiences 18 years and older