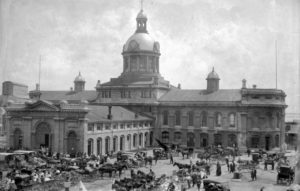 Once Upon A Time not too long ago and not too far away, yet high above in the sky, lived a people inside a rainbow.  Often times, these rainbow dwellers would slide down and live alongside the people on the ground.  Now, most of the rainbow people choose to live in great big cities with buildings that almost reach right back up to the sky so they can still feel close to home.  Others prefer villages and smaller cities like Kingston, ON Canada.  Kingston is very old, and is very grey and is made up entirely of limestone.  The houses are limestone, the streets are limestone, even some of the people act like they’re MADE of limestone! Some Kingstonians are very proud of their history and still treat many of the old, dead, white men that colonized their area as if they were still alive and that they should be adored and idolized like gods or super heroes or chocolate chip ice cream!  However, there is also much beauty in the city and there are those in Kingston that, like the rainbow people, can see the vibrant colours that hum and thrum from its sidewalks to the tops of the tallest trees.  These colourful citizens embrace music, art, laughter, love and people who are different unlike the limestone people who like things the same, grey, and rocky.  So of course the people of the rainbow are made to feel welcome at one of the largest celebrations of art and love in the city ironically on the site of a historical burial ground- called Skeleton Park. 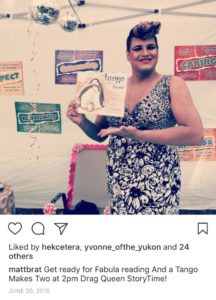 Fabula Queen of The North reads And Tango Makes Three in June 2015.

One year, two of the rainbow people’s queens came to the Skeleton Park Arts Festival dressed in fabulous gowns and crowns and read for all the little children of the land. Normally they dressed like most boys do but on special days like that day, they wore their royal fineness to look pretty for the people.   The children cheered and the grownups clapped with joyful approval and from that day on, this very special Drag Queen StoryTime occurred every year.  Little did the rainbow people know, but word of their little tradition had gotten out thanks to the Facebook Fairies and cities all over the land, big and small were doing Drag Queen StoryTime.  And although some of the rainbow people in bigger cities are claiming to have created this special event– we here in the land of limestone know the truth. The truth that sometimes the most magical, colourful moments to connect with each other can often originate from the smallest and greyest of places. 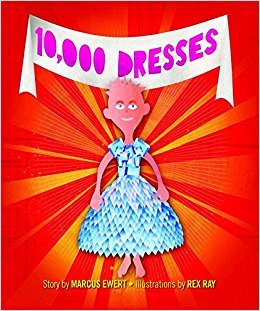 Drag Queen StoryTime is now a world-wide phenomenon and has even been written about in the NY Times.  The Times article however, erroneously credits a group out of San Francisco as starting the trend in December in 2015 and they seem to be taking the credit. So in this age of alternate facts, here’s the T.   Drag Queen StoryTime originated in Kingston, Ontario Canada in June of 2015 at the Skeleton Park Arts Festival. Executive Director of Reelout, Matt Salton had just returned from a trip in Toronto where he picked up a new book for the Reelout Lending Library from our friends at the Glad Day Bookshop called 10,000 Dresses (by Marcus Ewert, illustrated by Rex Ray published by Seven Stories Press).  This beautiful story follows a young transgender girl named Bailey and her love for dresses. A couple of days later called Matt received an email from Mariah Horner, one of the festival’s coordinators, asking community-serving agencies who had booths in the park to find unique and family-family ways to engage with attendees at the festival. 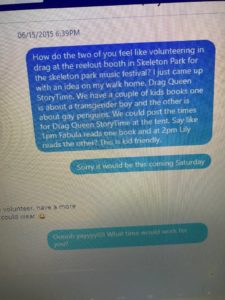 Matt invites his drag queen friends to do something cool with the community.

As Reelout is primarily an LGBTQ+ festival for adults, Matt pondered how the organization could thematically engage with families as he walked home and as he had many friends in the community who were drag queens and with the new book still fresh in his mind, Matt quickly reached out to his drag queen friends and asked if they would like to read the book to children on the day of the festival and it would be called Drag Queen StoryTime.

And so, on a sunny afternoon in McBurney (Skeleton Park) on June 20, 2015, the world’s very first Drag Queen StoryTime/Hour was borne with Fabula Queen of the North and Lily Landers (Devine) reading 10,000 Dresses and And Tango Makes Three (Simon and Schuster) by Justin Richardson and Peter Parnell, illustrated by Henry Cole.  Drag Queen StoryTime is now a staple of the programming at the Skeleton Park Arts Festival every year.  And we are in talks with the Kingston Frontenac Public Library to offer more exciting programming this year! 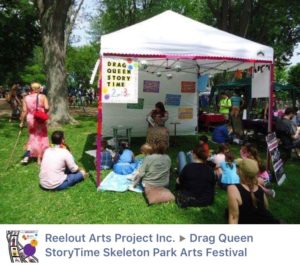 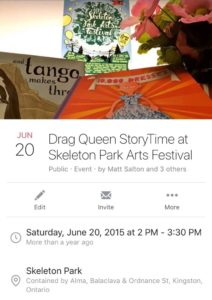 The event banner for the world’s very first Drag Queen StoryTime in June 2015.

In 2018, Reelout is proud to present Miss Tyffanie Morgan (Miss Gay Kingston) and Lilith Cain (both fabulous drag performers and McBurney Park Neighborhood residents) to read A DAY IN THE LIFE OF MARLON BUNDO (Chronicle Books)  written by Marlon Bundo and Jill Twist, illustrated by EG Keller and created by the team at Last Week Tonight with John Oliver and MY PRINCESS BOY by Cheryl Kilodavis, illustrated by Suzanne DeSimone (Simon and Schuster).  1pm at the Main Stage. 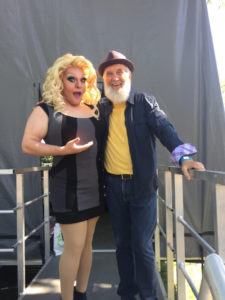