If you’re looking for an enjoyable, pleasant surprise in your movie-going adventures, you cannot go wrong with the sneaky charmer of a film by director Juan Felipe Zuleta and writer Leland Frankel. Trust us, there is no synopsis that truly does this film justice but here goes!

Peter (played by the amazing Matthew August Jeffers) is a misanthropic dwarf hiding from the world in his shabby New York City apartment. But an unexpected visit from his upbeat—and possibly unhinged—neighbour Winona forces him out of his shell and onto an impromptu road trip. Their destination? What she believes to be the site of an upcoming alien visitation in the wilderness of rural Canada. On their increasingly surreal odyssey, Peter and Winona will encounter bickering lesbian cosplayers, shroom-addled survivalists, and even extraterrestrial highway cops. But the further they go and the more their trauma comes to light, it becomes clear that the only thing more nerve-wracking than being abducted is being alone in the universe. 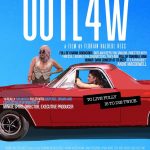 Two oddball lovers, transfemme Val and Two-Spirit Rudy, stranded on the side of a rural road, bicker about their ill-fated relationship and forget that the bigger issue at hand is the, possibly, dead body in the cargo bed behind them.