The fight for supremacy between a school’s most popular girls takes an unexpected turn when Tanner (Michael J. Willett) becomes its first openly gay student. As they race to bag the big trend in fashion accessories, the Gay Best Friend, Tanner, must choose between skyrocketing popularity and the friends he is leaving behind. Darren Stein (Jawbreaker) returns with another comic send-up of high school clique culture, including memorable performances by Megan Mullally and Natasha Lyonne. 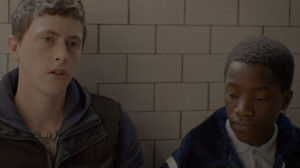