Five years ago, best friends Casey and Robin parted ways. Casey wanted to draw cartoons and take over their grandparents’ sheep farm, Robin wanted to leave town and never look back.  Now, five years later, Casey and Robin find themselves (against all odds) chasing a teenager through a magical, monster-infested forest, struggling to regain Casey’s stolen sketchbook so that they can get the hell back home. Trouble is, The Butterfly Queen wants the sketchbook as well, and she’s clever, desperate and makes the rules.

This film really embodies the joy of independent filmmaking with a tiny budget, developed over 5 years, involving 80 people and shot on the director’s parents’ Vermont farm during the pandemic. “I really love fantasy. Odd, Terry Gilliam, Terry Pratchett, Holly Black-style gritty sardonic fantasy. The kind where you can see the wrinkles and the stitches. And so I built a queer-inhabited fairy-tale that was driven by the twists and turns of trying to keep your friendships alive. We were able to create a complete magical world (during the pandemic) because neighbors loaned garages and power tools, universities gave us access to rehearsal rooms, we used library WiFi for endless Zoom calls and our art team worked thousands of hours through nights and weekends to hand-carve armor, build weapons and dress and paint our huge sets.” – Liam O’Connor-Genereaux 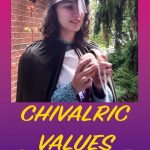 A medieval knight uses a dating app to find true love in the modern world. It doesn’t go as easy as she had hoped!