Well the weather outside is frightful but inside The Screening Room– Reelout4Teens is Deeelightful!

It’s Friday, February 8th and to celebrate #SNOWGAY2013  we’re offering our Reelout patrons an inexpensive way to shake away your winter blahs.  Tonight Only you can purchase tickets to  ALL THREE PROGRAMMES for only $15. That’s a 50% savings off the non-members price.  Individual programmes are still regular price $10 for non-membere, $9 for members and $8 for youth ages 13 to 24.

Why not start out with an early dinner at SIR JOHN’S PUBLIC HOUSE at 343 King Street East a mere five minutes from the theatre?  Enjoy a warm Scottish meal by the fireplace (the hot mulled cider is delicious!) and think about all the exotic places Reelout will whisk you away to this evening.

Our snowless journey begins at 6:30pm and nothing says exotic more than a small town trailer park in Pennsylvania during the 4th of July in Erin Greenwell‘s indie comedy MY BEST DAY. A queer favourite at last year’s Sundance Film Festival, this quirky tale of friendship and family from lesbian filmmaker Erin Greenwell, MY BEST DAY tells the story of Karen and her butch friend and co-worker Megan who find that their mundane jobs at the local refrigerator repair store are about to become a whole lot more interesting. A dysfunctional family comedy that makes your family look normal.  Before MY BEST DAY, we travel to a parking garage in Edmonton (exotic enough for you yet?) where brilliant filmmaker Trevor Anderson (Rock Pockets, The High Level Bridge) reveals the true story of his great-uncle Jimmy through song and dance.  You can cross off seeing a Broadway -style musical featuring Judy Garland entirely set in a parking garage off your bucket list.  This film features six original songs by Bryce Kulak and was awarded the prestigious DAAD Short Film Prize at the 2012 Berlin International Film Festival.   This programme is suitable for ages 13 and up and is a Reelout4Teens presentation funded by The Ontario Trillium Foundation.

Your journey gets a whole lot sunnier (and hotter for you teenagers) at 8:30pm as we travel to sunny California for Quentin Lee’s WHITE FROG.  Lee, a former resident of Montreal has made quite the career for himself making entertaining and thought-provoking queer films (including Ethan Mao, and Drift).  Lee outdoes himself with a stellar and talented cast including the impossibly gorgeous Joan Chen who will always be known to me as the double-crossing femme fatale Josie Packard in David Lynch’s Twin Peaks but will be familiar to a queer film festival audience from her role in the lesbian romance Saving Face. The lovely Kelly Hu know to genre fans as Lady Deathstrike in X-Men 2: X-Men United and as Pearl in Vampire Diaries co-stars.  However the real focus of this family drama are the boys and WHITE FROG doesn’t skimp on the Tiger Beat guy candy. 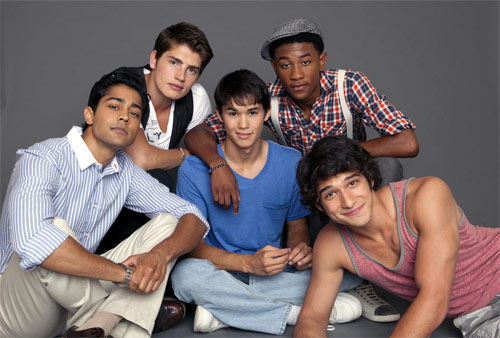 In SPACE no one can hear you scream.  But at 10pm we can sure hear you sing!  That’s right Reelout audiences we’re jetting off to Ganymede, one of Jupiter’s moons for the animated Sci-Fi musical STRANGE FRAME: :LOVE & SAX by G.B Hajim a most unique and colourful visual experience that features an out of this world (you’re welcome) voice cast of genre actors including Tim Curry, Michael Dorn, George Takai, Cree Summer, Juliet Landau, Claudia Christian, Ron Glass, & Alan Tudyk. This film will be preceded by another genre story, this time live-action by director Charlie Curran and writer Jennifer Bird. THE FLIGHT is about an island post-apoalyptic society and a young woman by the name of Athena who longs to fly free from its constraints. And if that wasn’t enough, Kingston’s own FABULA QUEEN OF THE NORTH will be dropping by with a fabulaicious door-prize for one lucky audience member!