Our audiences have spoken.  In a year where submissions to the Reelout Queer Film + Video Festival where at an all-time high and the selection process was near-impossible for our programming committee — our record-breaking number of attendees were tasked with grading the 15 official feature film selections. In a year of precedents it only seems fitting that the Audience Award for Best Documentary and Best Feature are in fact the same film.  With 98% of our audience rating the film as “Excellent” and the other 2% rating it as “Above Average” we are pleased to announce the winner of the 2015 Winner of Best Documentary AND Best Feature Film — Erica Tremblay’s IN THE TURN. 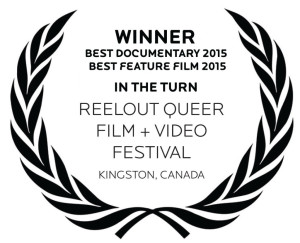 This film is a testament to the power of queer organizing to raise the profile and visibility of the LGBTQ community and in particular, to enrich the life of one Northern Ontario girl who just wants to live her life and kick ass in roller derby.  We were so pleased to host the film’s stars Karen and Crystal with the help of the Kingston Derby Girls, RBC Royal Bank, Queen’s University Faculty of Arts and Science and the Queen’s University Department of Film + Media Studies. 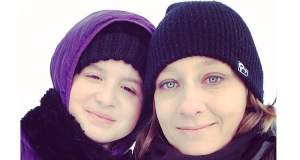