The Reelout Arts Project is thrilled to announce our exciting project launching in Kingston, Ontario this summer! 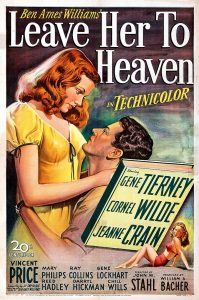 The Reel-In Str8 Cis Film Festival will hopefully be perceived as a subversive, tongue-in-cheek response to critics of queer film festivals who claim, “You don’t see straight folks getting their own film festivals, why do you need special attention?”  We’re proud to provide a platform to showcase our heterosexual, cisgender friends who don’t see themselves represented on the big screen and it is our hopes that with this screening series, never again will we hear someone claim they don’t have their own film festival.   This classic film screening series will take place on Sundays (the straightest day of the week) at 7pm during the month of July (the month AFTER Pride Month of course) at The Screening Room (120 Princess Street).   Each film uniquely portrays heterosexual, cisgender protagonists flirting/dating/marrying/breeding/adopting but with a decidedly queer lens.  Women in Love is very much about heterosexual courtship but the screenplay was written by  (super) gay screenwriter Larry Kramer and features a homoerotic, naked wrestling match between characters played by Alan Bates and Oliver Reed.   Polyester was written and directed by (also super) gay John Waters and stars legendary drag performer Divine in her first sympathetic performance as suburban housewife Francine Fishpaw.  Mommie Dearest and Leave Her to Heaven both fall into the camp melodrama aesthetic championed by the queer community and both feature central characters who will go to great lengths to keep up appearances.  Tickets will be available at The Screening Room Box Office. 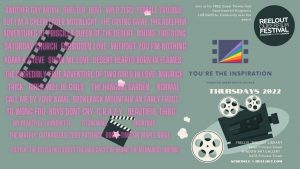 You’re The Inspiration Queer Movie Socials will be a weekly, casual, free (donations welcomed) screening of films that have inspired members of Kingston’s 2SLGBTQIA+ communities in some way. Everyone is welcome to attend.  The schedule will up updated on the www.reelout.com website.  The films will be screened mostly in the Jeannie’s Place Common Room at Trellis/Reelout Lending Library (844A Princess Street) and at the Window Art Gallery (647A Princess Street). The GOALS of this project are:

– Creating a safe space for members of the local 2SLGBTQ+ community to gather in an environment that doesn’t center around bar culture.
– Offering a low-key, small-scale, less-intimidating opportunity for people who may be experiencing social anxiety and/or struggles to reintegrate back into social activities after the pandemic.
– Revitalizing Reelout’s outreach and engagement to/with the community after spending two years offering remote activities.
– Celebrating independent queer motion pictures and invoking a sense of nostalgia.
– Providing a space to discuss representation and how we as a community have changed through the years.
These projects are funded in part by the Canada Council for the Arts, the Ontario Arts Council, and the City of Kingston and the Kingston Arts Council through the City of Kingston Arts Fund.  We are grateful to these funders and for public sector funding for the arts.
« 2022 ReelOut Film Fest Award Recipients Announced! » What’s Reeling Out This August!