Torrey Pines is a stop-motion animated feature film by director Clyde Petersen. Based on a true story, the film is a queer punk coming-of-age tale, taking place in Southern California in the early 1990’s. Raised by a schizophrenic single mother, Petersen’s life story unfolds in a series of baffling and hallucinated events. With a mother fueled by hallucinations of political conspiracy and family dysfunction, Petersen is kidnapped at the age of 12 and taken on a cross-country adventure that will forever alter the family as they know it. 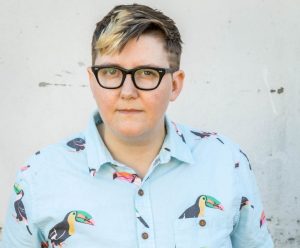 Clyde Petersen is a Seattle based artist, working in film, animation, music, installation and fabulous spectacle. He is a member of the transgender and queer communities in Seattle. He travels the world with his punk band Your Heart Breaks and hosts a TV show in a small handmade boat in the Washington Park Arboretum. Boating with Clyde features artists from around the world, performing on the waterways of Seattle and can be seen online. Past projects also include the 90-minute multimedia show Gender Failure with Rae Spoon and Ivan Coyote.

Brought to you through the generosity of the George Taylor Richardson Fund.